Knitting with wool, using two colors, is such fun. This is called Fair Isle, or stranded colorwork knitting. I was hooked after knitting two of the Katie’s Kep hats, and some mittens for a KAL (knit-along) last winter. Now I am knitting the Keramos lined wool cowl using two colors. What I really like about this pattern is that the wool is lined with a softer yarn.

Designers offer sales during the first weeks of TWTCOLORKAL2021 (a knit-along hosted by The Woolly Thistle), so it’s a great time to find patterns with discount codes! It’s how I found a new favorite designer named “Bunnymuff” and used the discount code to buy two of her patterns.

The one I will be knitting first is the Keramos Cowl, which is a Fair Isle pattern with a lining and optional embroidery. I’m entering this one as a project for the KAL, which began February 19th. The other pattern I purchased is a colorwork hat with chickens! My daughter plans to raise chickens soon, and I will knit the hat for her at a later date.

Colors I am using: Jamieson & Smith shade FC9MIX (lavender) and it is so pretty. I’m using it for the background color. Rauma is the dark navy blue yarn, #0449. The embroidery will be done on the foreground color and it needed to be dark.

The pattern says to cast onto a 24 inch circular needle but all I had was a 16 inch. It worked okay, but the stitches were a bit bunched. I ended up buying a 24 inch needle so I could see the stitches more clearly. I also went up in size, and cast-on using a size 3 then changed to a size 4. This is quite a bit larger than what the pattern calls for, but I was afraid the cowl might be too tight if I didn’t.

The cowl begins with a provisional cast-on. Once the front pattern is knit, a lining is created and attached to the bottom, or beginning of the cowl using a 3-needle bind-off. I’ve never done that, *but it was fairly easy. Before the lining is attached by casting off, a little embroidery can be added. Another new thing for me.

The Knit Companion app was a big help when it came to reading and knitting this pattern. If your eyesight is not good this app is invaluable when doing colorwork knitting. At first I had some difficulty getting it all organized as the colorwork pattern spans five pages which must be knit in sequence. As I am still learning all the ins and outs of this knitting app.

Eventually what I did was place silver stitch markers to separate my stitches to show each page of colorwork. To make things easier, and to catch mistakes quicker, I also divided each page chart in half. I used plastic stitch markers for that. This way I could easily see if I was on a new page, or in the middle of one.

I used the numbers section on Knit Companion to mark pages and rows. I used the “notes” section at the bottom to remind myself how I was tracking this pattern. Every time I finished an entire 5-page row, I went back to the first page number and changed my highlighter to the next row on every page before I began knitting. That way, once I went to the next page, the row was ready for me to knit.

The image above is of my Knit Companion app on the iPad. The inverted highlighter shows my row as 19, and I have also kept track using the blue number on the right. The red number 4 is the page I will begin knitting on (Rows 4-8 hold the pattern). As I move through the next pages, I will change that number until after page 8 when I will go back to page 4 and change the row to 20.

What is The Best Way to Find Cowl Gauge?

Finding gauge for a colorwork cowl is not easy. Basically you need to knit the whole thing and then see how it turns out! Or, if you have colorwork swatches, or more likely whole projects knit up, find your gauge on those. It is not easy to count such small stitches.

Because cowls aren’t as important for fit, I didn’t count anything. I simply chose a larger needle size, because I tend to knit tightly. The cowl could not end up too tight for my neck, and it turned out I was right to do this. Once I had knit a couple of colorwork sections, I measured width and estimate the height.

It turns out that my width around is spot on and matches the sizing in the pattern (21 inches around). My two finished rows of colorwork sections measure about 5.5 inches and the pattern calls for 5 “rows”. But the finished cowl should measure 10 inches high! This means my horizontal gauge is good, but my height gauge is off. All I can do to fix this is shorten the project. This is easy to do on the Keramos because I will knit two more row sections and leave off the 5th row entirely.

In the photo above, I am comparing my Namu cowl size, which I knit a while ago for size. The Keramos is wider, but will not have the “give” of the cabled Namu, so that should be fine. Colorwork is not very stretchy.

The turquoise blue yarn is a ball I’ve had sitting around. It’s some kind of single ply sock yarn, but that is all I know. The yarn is brightly colored and soft and silky which is perfect for the inside of this wool cowl. Now it’s just knitting along until the liner length is right.

I stopped knitting after four colorwork “rows”, or sections. My cowl measures 9.5 inches tall. Now the lining will be knit and folded inside to be attached at that provisional cast-on along the bottom. I’m dreading that. It’s a 3-needle bind-off which I’ve never done. (Turned out to be pretty easy!)

The Keramos Cowl designer, “Bunnymuff” aka Mona Zillah (link goes to her Ravelry Store page), includes cute embroidery on her knitting projects. My first try at embroidery is not exactly cute, but it was fun learning. I did a lot of flower removal over and over just to get these little sewing designs finished! Then, I did a little bee, which I love. I got the idea for this bumblebee from a YouTube image.

My Embroidery Skills Are Lacking, But it Was Fun Trying

After searching through a bunch of embroidery stitch videos on YouTube, I found a couple that were pretty nice so I’ll list them here. Using wool yarn, on a knit surface, is a bit more challenging than embroidery thread on drawn patterns, but you will get the general idea.

Finishing Up Knitting the Keramos Cowl

Finally I finished up knitting this cowl. It seemed to take a while, but it was on hold for two months when I took my trip to New Hampshire. I brought the Wild Angelica socks to knit and left this cowl behind.

The worst part of this pattern, for me, was picking up those stitches on hold. It was a tedious chore. The three needle bind-off went well, and ended up looking nice. I used the lighter purple color to do it and watched a YouTube video to figure it out.

I did try the cowl on before washing, and it is big and thick. Once it’s dry I’ll get photos wearing it (below). This one will definitely keep a neck toasty warm! It feels so good to finish up a knitting project. 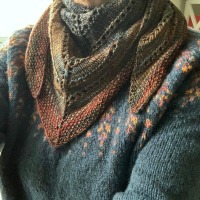 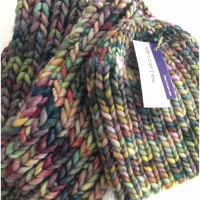 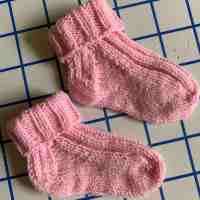 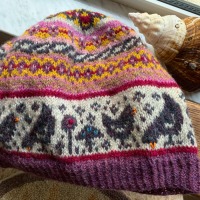 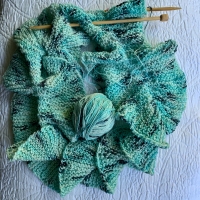