When I was growing up pencils, pens and markers were what I used to create the images I wanted. I usually copied my ideas from something on television or in a book. We had this big book of nursery tales and I loved to try and re-create some of the drawings in there.

I grew up in the 60’s and 70’s so of course peace signs and hippy stuff, such as clothing or just designs with lots of color and a psychedelic look were what I drew as a teenager between rolling joints. (Just kidding- really).

Now I have found this wonderful new media of drawing online. It’s much easier now to correct a mistake than erasing or trying to cover up a pen mark that goes astray when I am drawing in Paint.net. I am not saying that I prefer it over pencil, but it is definitely faster and more colorful in some cases.

I truly don’t have the time to draw something, scan it and upload it and then re-size it and load it into my store art center for use. Drawing online gets me the image fast.

For instance, I just made some thank-you stationary for Christmas and had the snowman and Christmas tree to use at the bottom. (I had drawn them a few days ago). But I needed something for the top of the paper and I thought that a string of Christmas lights would look nice there.

So I drew some – uploaded them, and ta-da!! My stationary was complete! 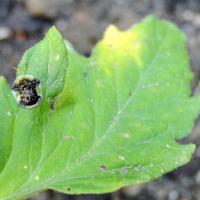